Former President Ronald Regan’s famous “Tear Down This Wall” speech, served not only to reunite Germany, but also became a catalyst in the formation of an academic relationship between Texas Tech University and East Germany. Following the fall of the Berlin Wall in 1989, Dr. Meredith McClain, a TTU German faculty member, volunteered to help start the “Summer School for English” in the small farming village in the former “East German Zone”  named Wust. Frau von Katte, born in the area near Wust, wanted to return there and get something meaningful started in the summers. She enlisted three Ph.D.s volunteers from the University of Texas-Austin to help bring English lessons, music and fun to young East Germans, eager for the chance to get to know Americans and finally to learn English instead of Russian.

McClain’s initial relationship to the farming community of Wust evolved the establishment of the TTU Summer German Program in Wust, a study-abroad curriculum that lasted for more than 15 years before morphing in the fall of 2005 into the Tech Tech Center in Quedlinburg, Germany.

Now, through an unexpected family connection, Texas Tech is returning the favor of hosting.

Thanks to McClain’s career-long connections to Wust, two German military students have taken residence on the Texas Tech Lubbock campus for three months and are conducting research on lifelong learning and continuing education in the U.S. and Germany.

Gordon Ziemann on the rim of Palo Duro Canyon.

“In March 2011, I received an email from Gordon Ziemann, introducing himself as the grandson of one of the host families during the TTU-Wust summer programs, Familiy Conert,” McClain said.

Ziemann, now a student at the German Military University in Munich, had won a coveted award to spend time in America pursuing a research project in the area of lifelong learning with his friend and fellow student, Saskia Peter, McClain said.

Four months later, on July 5, plans were concrete and Peter, 22, and Ziemann, 23, flew from Munich, Germany to Lubbock, Texas, where they will reside through September 19.

Studying intercultural media, and adult education, Peter and Ziemann both take a deep interest in developing a well-functioning system for lifelong learning for their home-country. The subject of lifelong learning offers a multitude of possibilities and lacks the attention of research, which it deserves, Peter said.

Texas Tech, home to the Osher Lifelong Learning Institute, as well as a solid German language program, shares Peter and Ziemman’s passions for diversity and lifelong learning, making it the perfect location for their research. 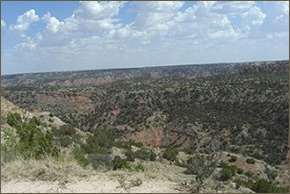 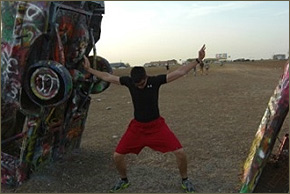 Memories captured by Gordon Ziemann & Saskia Peter during their driving tour to Palo Duro Canyon & the Amarillo, Texas area (including the Cadillac Ranch, directly above).

“The unique thing about this research is the hidden aspect of intercultural connection in my mind,” Ziemann said. “We hope to give our professor we are working with in Germany some new opinions about the possibilities in intercultural support and experience to develop the system of lifelong learning in Germany.”

Peter said this research, which is being conducted through an online survey, will also serve to help their professor on a similar project funded by the Volkswagen Foundation.

Although they have only been in Lubbock a short time, Peter said she and Ziemann enjoy how polite and pleasant people are at Texas Tech.

“Everyone in Texas likes to help us, drive us around or talk with us,” Ziemann said.

Peter and Ziemann said they are very grateful for extensive resources such as the Texas Tech library, and the Texas Tech faculty who helped them attain access to these tools, especially Stefanie Borst, Laura Beard and Birgit Green.

Texas Tech is a big change from their mid-sized military school of about 4,000 students, Ziemann said.

Peter, a second lieutenant in the German military and Ziemann, a master sergeant, both find it interesting studying at a civilian school. Most of the students at the military university in Germany are soldiers, creating a different atmosphere than the one at Texas Tech.

“We were also really surprised about the dimensions of the campus. Although we knew that Texas Tech has a large campus, we could not imagine that it is this big,” Ziemann said. “At Texas Tech they have so many different subjects and this would not be possible in the university of the German armed forces because there are less students who attend.”

Some daily events in the U.S. are very different from doing the exact same task in the students’ home country.

“We made our first experience in driving a car in America. And, believe me, it is something else in Germany,” Peter laughed.

Peter said their trip to Palo Duro Canyon in Amarillo, Texas, was one of their favorite experiences.

“It was really nice and special,” Peter said.

When not working on their research, Ziemann said he enjoys sports, especially American football, while Peter said she loves to swim and sing. The visitors look forward to the Tech game, opening the season and want to experience that exciting event if possible.

After their return to Germany in mid-September, Peter and Ziemann plan to spend about two more years completing their degrees and will both continue to serve in the German armed forces.

“Ziemann and Peter’s totally unexpected selection of Texas Tech and Lubbock, rather than any other place in America, is one of many rewards for 35 years of connecting our area with Germany. While the general trend in America is a reduced interest in German academic programs, the small, but strong German unit at Tech has experienced about a 19% growth over the past three years. We have strong connections to Wust, Quedlinburg and Berlin, and an active network stretching to numerous universities and Tech graduates in all regions of the Federal Republic.”